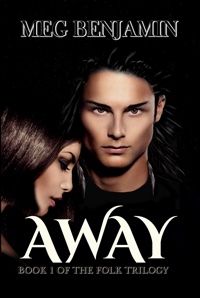 His job is keeping secrets. But she needs the truth.

Grim Morrigan, Guardian of the Ward and part-time private detective, polices the Folk, the clans of fairies who live in the foothills outside Denver. But his main job is concealing their true nature from the mortals around them. Enter mortal Annie Duran, who hires him to look for her brother Richard, missing and presumed dead for ten years. Annie has seen Richard in the parking lot of the nightclub where she works. Now she wants answers, and Grim’s supposed to find them. The quest for Richard ensnares both Grim and Annie in a sinister conspiracy involving kidnapped women and outlaw magic. But they also discover their own overwhelming attraction to each other. When Annie herself disappears, Grim’s need for answers becomes even more urgent. With the help of a dissolute prince and a motley crew of unlikely fairies, Grim confronts a rebellion among the Folk. And it may take more than just magic and luck to save both Annie and Grim this time.

Around ten o’clock, a man at one of the front tables began to glow.

Annie blinked, trying not to gape. The glow seemed to be coming from the man’s shoulders, encircling his dark curly hair, almost like a halo.

The Threshold could be a very weird place, even on weeknights. If the tips hadn’t been so good, she might have quit. But being a barmaid paid the rent, at least for now.

She checked the tables near Mr. Glow. Nobody else seemed to notice him.

Moretti, the manager who also served as the bartender, narrowed his eyes. She probably should make a circuit through the room, taking orders for refills. She grabbed her tray as he beckoned her over to his side of the bar.

“You checked on the tables against the wall? Those college boys could use another pitcher.”

“Got something else you need to do first. Take these to that table.” He placed two margaritas and a cosmopolitan on her tray and pointed at a table full of women near the center of the room.

Fortunately, there was nothing weird about the women, unless gorgeous was weird. They were knockouts, all of them. Long, glossy black hair, flashing eyes, lips like crushed berries. Their breasts were the size of melons, but their waists were tiny. They chattered to each other in a language that sounded a little like Spanish but wasn’t.

As she headed their way, she glanced at the glowing man. The two women at his table didn’t seem to be paying much attention to him, even though he had his arms draped around their shoulders.

Annie placed the margaritas and the cosmopolitan on the women’s table, and waited while the beauty queens giggled together, digging money out of their purses and counting out spare change.

One of them looked up at her, dark eyes glittering like mica. “You’re very pretty,” she purred. “Are you new here?”

Annie couldn’t quite place her accent. “Thank you. I’ve been here for a couple of weeks.”

The woman’s eyes widened, her lips spreading in a faintly lewd grin. “You’ll enjoy working here. We could show you some other places, too, my friends and I. Great parties.”

Annie’s shoulders tensed. Somehow partying with these women sounded creepy. Something was off about their glittering eyes. She fought down a quick shudder. “Thanks. Maybe I’ll join you. Sometime.”

She started to back away until she remembered she hadn’t collected the money for the drinks. The woman pushed some bills at her, showing a hint of teeth. As Annie started to take the cash, the woman rubbed her fingers across her palm, leaving a quick trail of heat. Annie stared at her hand and at the woman’s laughing face.

“Go on, mortale,” she murmured. “Go count your money.”

Annie walked to the bar, the sound of mocking laughter rising behind her. Her palm throbbed.

Annie headed for her other tables. She had another bunch of college boys at the table near the center, a couple at the two-top near the door, and a solo guy at a table on the far side.

A very interesting solo guy, in fact. Six feet tall at least, probably more. Dark hair, broad shoulders, built a little like a distance swimmer. Looking sort of amused. The corners of his mouth edged up as he studied Mr. Glow.

Her friend Carolyn brushed by, her tray on her hip. “I see the detective’s here.”

“No. Private. He works for the Ward agency. They’re the security company at the club, so I guess he’s sort of like a bouncer.” She loaded three bottles of beer on her tray and headed for the other side of the room.

Annie glanced at the detective again. His dark brown hair spilled down around his shoulders like poured silk. His deep-set eyes studied her as his smile widened.

A quick shiver of awareness danced over her skin. Hot. Definitely hot.

Better not go there. Shoving her tips into her pocket, she headed for the college boys. When she turned toward the detective again, he was watching Mr. Glow. Why did it suddenly feel hotter than usual in here?