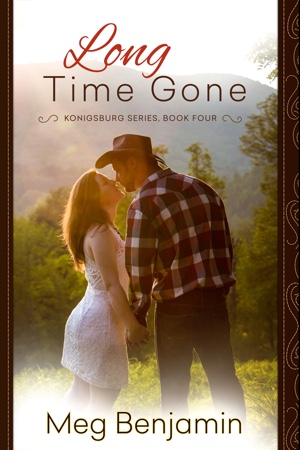 A future with the woman of his dreams is within his grasp...if the past will stay that way.

Erik Toleffson wasn’t looking to become Chief of Police. He’s got enough trouble trying to rebuild his relationship with his three brothers who, until just recently, ran the other way when he approached. He’s not the bully they grew up with, but bad memories are tough to overcome. Morgan Barrett is as worn out as a vat full of crushed grape skins. She never planned to run Cedar Creek Winery, but there’s no one else to shoulder the load as her father recovers from an injury. All she needs is a little sleep. Just a five-minute nap in the booth at the Dew Drop Inn…if that guy across the bar would stop staring at her as if putting her head down on the table is a crime. After Morgan yawns in Erik’s face, there’s nowhere to go but up. With time, though, their relationship warms like a perfectly blended Bordeaux. Until the shady mayor digs into Erik’s past and dredges up information that could drive a permanent wedge between him and his brothers—and sour any chance of a future with Morgan.

“Have a seat, Erik. There’s room over here beside us.” Allie Maldonado put a hand on the shoulder of the woman next to her, Ms. Bambi-Eyes.

A set-up? Allie Maldonado actually thought he was worthy of a setup? Erik almost felt like shaking his head to clear it. Nobody wanted to hook up with him.

“This is Morgan Barrett. I don’t know if you’ve met. Her dad’s a partner in the Cedar Creek Winery outside town.”

Morgan Barrett raised those remarkable eyes once again. Erik’s jaw tightened. Aside from the eyes she looked a little like she’d been dragged through a knothole. Rumpled clothes, mussed hair. Very sexy mussed hair.
If she wasn’t a drunk, she was one of the tiredest individuals he’d ever seen.

“Pleased to meet you.” She yawned in his face. Well, okay then, not a drunk.

“I’m sorry.” She shook her head. “We got a shipment of grapes last night. I’m usually more alert than this. I need to go home and sleep until the next load comes in, preferably in another week.”

Allie nodded. “Harvest season. I remember. You going to have a new wine for the Hill Country Wine and Food Festival?”

“Well, that seems to take care of the possibilities.” Cal grinned.

Morgan sighed. “Esteban’s got one ready to go, but ATF hasn’t approved the label yet. We’ve been waiting on it for weeks now, but with Homeland Security it takes forever.”

“Homeland Security?” Erik set his Dr. Pepper down on the table and pulled up his chair. “Wine is now considered a lethal weapon?”

“You haven’t tasted the wine from Castleberry’s, have you?” Morgan shook her head. “Sorry. I shouldn’t be dissing the truly lousy wine being produced by our competitors. ATF, which is now part of Homeland Security, has to approve the text on wine labels and wine labels are not high on their list of priorities.”

“So what are you going to call it?” Allie asked. “Is it red or white?”

“Red. It’s Esteban Avrogado’s first blend. He asked me for some advice, and I came up with a new name so we can market it.”

Erik couldn’t tell for sure in the gloom of the Dew Drop, but it almost looked like she was blushing.

“It’s a Bordeaux blend—cabernet, merlot and cabernet franc. Only we can’t call it Bordeaux because of the EU rules since it’s not from Bordeaux.”

“So you’re calling it…” Allie gave her an encouraging smile.

“Well, because it’s… I mean, people don’t always know how to pronounce…” Morgan’s lips thinned to a taut line. For a moment, she looked close to tears.

Erik had a sudden, unaccountable urge to get that look off her face. “That’s funny,” he said, pushing his lips into something that was in the neighborhood of a grin. “Bordeaux, Bored Ducks. Funny.”

Allie gave him an elbow to the ribs. Wonder winced and settled back in his chair.

Lars nodded. “We Toleffsons may not be swift, but we usually get there eventually. I think it’s funny too.”

Allie reached for her glass. “Novelty wine labels are a good marketing tool. It’ll get the browsers’ attention.”

“It will indeed,” Wonder intoned. “All across the state, the aisles of the wine sections will be clogged with shoppers muttering ‘What the hell?'”

He winced again. For a small woman, Allie Maldonado appeared to wield a mighty elbow.
“I like it. And I’ll bet the wine tastes terrific. All the Cedar Creek wines are good, Morgan.”

Morgan grimaced. “I just hope it doesn’t take people so long to figure out the name that they forget to buy the wine.”

“Sure,” Wonder croaked, rubbing his side. “Wouldn’t miss it.”

Morgan yawned again. “I need to go back home and get some sleep before the next crisis.”

“Morgan, you shouldn’t drive.” Cal’s face was serious. “You’re too tired. Stay over with us.”

She shook her head. “It’s okay, I’m not driving. Ciro is having dinner with Nando. He said he’d give me a ride back if I hike over to the station.”

Erik blinked at her. The police station? Where he’d just left? What the hell was going on there now? The last thing the Konigsburg PD needed was another crisis. “I can give you a ride to the station. I need to check on a few things before I go home.”

Not exactly true, but close enough. If people were dining at the station, Erik figured he should know about it. Nando Avrogado was another of the part-time officers, and the only Konigsburg cop Erik would depend on to be able to find the keys to the cruiser in less than ten minutes. If anything happened that got Nando thrown off the force, Erik would be on the first thing heading out of town.

“Oh.” Morgan Barrett gave him a slightly dazed look, as if she were trying to remember just who he was. Then she nodded. “Okay. Thanks.” 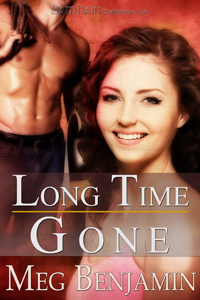 More Books by Meg Benjamin
« Brand New Me
Be My Baby »