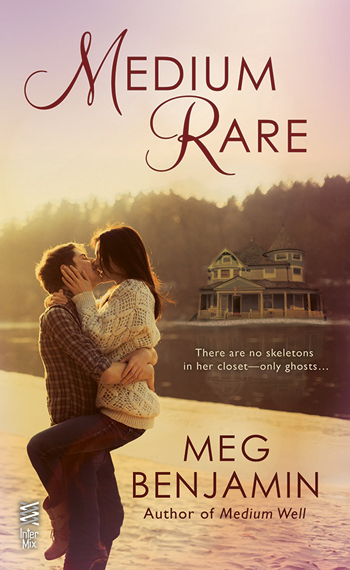 There are no skeletons in her closet…only ghosts

Rose Ramos was a reference librarian, until she inherited her grandmother’s house—and the family talent for connecting with the other side…

Moving into the lovely Victorian in San Antonio’s King William District is a dream come true for Rose—and also a nightmare. That’s the only explanation she has for the man hovering above her bed. But Skag is a ghost who’s been part of Rose’s family for generations. And now he’s all hers.

When Evan Delwin, a reporter out to debunk the city’s newest celebrity, posts an ad looking for a research assistant to investigate a famous medium making his home in San Antonio, Skag suggests that Rose apply for the job. Delving into the dark side has its own dangers for Rose—including trying to resist Delwin’s manly charms. But as the investigation draws them closer together, the deadly currents surrounding the medium threaten to destroy them all…


She raised her gaze slowly to the ceiling of the room. At the far end, something glowed a dim yellow-green, like some kind of night-light. She squinted. The yellow light became a blob, then seemed to elongate, becoming vertical, stretching from the ceiling halfway to the floor, perhaps five feet or so. Slowly, the light began to change, becoming bluish white, then gray, then resolving, very slowly into the outline of a figure.

Rose’s hands closed tightly on the coverlet. Her breath seemed to catch in her throat as her pulse hammered.

A deeply satisfying wave of exasperation washed over her.

“Hannibal Lecter?” she snapped. “Really? Are you kidding me? Hannibal Lecter? What kind of sick joke is this? Get the fuck out of my bedroom!” Amazing how the combination of terror and annoyance made her sound like she was in control.

Hannibal Lecter floated a couple of feet away from the foot of her bed. His expression seemed vaguely disgruntled. “I was trying to find an appearance you were familiar with. I thought you’d like it.”

“Who are you?” She took another deep breath, trying to slow down her pulse. “And why exactly shouldn’t I just get the hell out of here right now?”

“If you walk out now, you’ll never know why I’m here, will you? And don’t tell me you don’t want to know.” Hannibal moved back a few paces. “Give me a moment and I’ll come up with something else.”