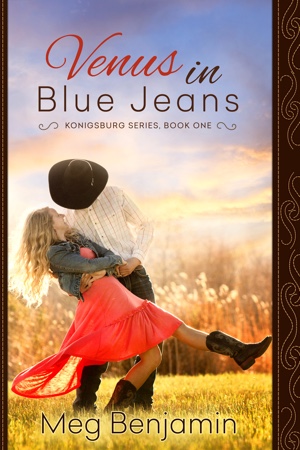 A guy, a girl, a Chihuahua

Coming off a broken engagement to a lying charmer, all bookstore owner Docia Kent wants is a fling, not a long-term romance. And for her fabulously wealthy and fabulously nosy parents to butt out of her life for a while. The Texas Hill Country town of Konigsburg looks like the perfect place to get both. Especially when she gets a look at long, tall country vet Cal Toleffson.

Cal has other plans for Docia. One glance at this six-foot version of Botticelli’s Venus, and he knows he’s looking at the woman of his dreams. Now if he can just fend off the eccentric characters of Konigsburg long enough to convince her romance isn’t such a bad idea.

One night of mind-blowing sex isn’t the only thing that leaves them both stunned. With Docia’s bookstore under attack, Konigsburg suddenly doesn’t seem so welcoming. Once again she finds her trust tested—and is left wondering if she was ever meant to have a happily ever, after all.

Docia Kent had had one mother of a day. First the mailman hadn’t brought the shipment that had supposedly been overnighted from Houston. Then it turned out the new CD rack didn’t fit into the space at the back of the bookstore. And as if that wasn’t enough, Margaret Hastings kept making those boneheaded complaints about the freakin’ wine and cheese party for the Liddy Brenner Festival.
Docia swore that if Margaret, owner of a store specializing in angel replicas, gave her grief about one more thing, she’d start selling angel repellant.
Beside her, her friend and assistant Janie Dupree was midway through her usual argument with Ingstrom.
“No Texas wine, Ingstrom?”
“By the bottle. You want a glass, it’s house wine.”
Janie turned quickly in Docia’s direction. “Want to share a bottle? Morgan’s winery just released a new one.”
Docia shook her head. “Margarita, Ingstrom. Silver tequila, on the rocks.”
Janie sighed. “All right, a glass of the house chardonnay. But one day you’ll understand why people go to Brenner’s.”
Brenner’s was the wine bar and restaurant where Janie and Docia usually went once they’d closed the shop. But Brenner’s didn’t serve margaritas, and after the day she’d just had, Docia really wanted a margarita. Now.
She massaged the back of her neck as if that could stave off the headache stirring at the base of her skull. The Dew Drop smelled of dust and stale beer, with just a smidgen of bodily fluids. It did nothing for her general attitude.
Not that Docia was ready for the Ritz just then. Maybe she should have changed her clothes before coming to the Dew Drop, grim though the place was. Maybe she should have taken a bubble bath. Maybe she should have gone to Brenner’s with Janie and tried flirting with the yuppies from Houston.
On the other hand, she hadn’t had all that much success finding anybody interesting at Brenner’s or anywhere else in town over the past few months. She ran through a quick list of her last few dates—the accountant from Arlington, the real estate broker from Fredericksburg, the orthodontist from Marble Falls. Losers, one and all. Basically, her luck with men sucked.
And, of course, her biggest mistake of all, Donnie Branscombe. How could she forget Donnie? Not that she hadn’t tried.
Docia took a deep breath and blew it out. At times, she thought her judgment with men was about as bad as her judgment with CD racks.
She glanced into the mirror behind the bar. The most gorgeous man in Texas was staring at her from the other end of the room.

Venus. Her red hair curled around her shoulders, a few tendrils wisping across her cheeks. She had to be at least six feet tall, given the way she towered over the woman next to her. Six gorgeous feet of woman. Her denim shirt was knotted beneath her breasts, showing a nice stretch of alabaster skin above the waistband of her jeans.
No visible tattoos. Always good to know.
Cal found himself looking at the knot again, and then higher. Oh sweet Jesus! Perfect. Pecos cantaloupe size. He rubbed his hands against his thighs, trying to distract himself from the series of lust-crazed visions flooding his brain.
Eyes. What color were her eyes? Hard to say in the dim light. He’d have to get closer. Yeah. Closer was definitely called for.
“What’s up now?” Wonder peered beyond his shoulder. “Having revelations, are we?”
“You might say that.” Cal tamped down the last of those glorious pictures his mind had conjured up. “Who is she?”
“Who?” Wonder leaned further forward, squinting toward the other end of the bar, then sat back and shook his head. “Oh, bad idea, Idaho. Definitely not a good woman to start your Konigsburg career with.”
“Why not?”
“Out of your class, bucko, definitely out of your class.” Wonder sipped his Spaten again. “Much too tough for a beginner.”
“And again I ask, why? Who is she?” Cal refused to look back at the man trying to dampen his enthusiasm. Not when the other end of the bar had so much to see.
“Docia Kent.” Wonder nodded in Venus’s direction. “Owner and sole proprietor of Kent’s Hill Country Books.”
“Stuck-up bitch,” Terrell mumbled.
Cal contemplated “accidentally” upturning Biedermeier’s barstool and dumping him beside the bar, but miscellaneous bits of Biedermeier would only further mess up Ingstrom’s floor.
He frowned. “So why is she out of my class? How do you even know my class anyway, Wonder?”
Wonder hunched over the bar, staring into the mirror. “Docia Kent has lived in Konigsburg for two years now. Never dated a local, far as I know. And I know far, believe me. Many have tried. None have been chosen. She’s definitely not interested in Konigsburg males. She’s not what you’d call a local herself.”
“And this is bad?” Cal shrugged. “I’m not a local either—not yet, anyway.”
“There’s some question about how much Ms. Kent wants to be a local, Idaho, given that she hasn’t shown much interest in Konigsburg’s finest to date.” Wonder tipped up the last of his Spaten, raising an eyebrow at Cal.
Cal squinted back down the bar. “Always a first time.”
“Indeed there is.” Wonder nodded, rubbing his hands together gleefully. “Oh this is going to brighten up the summer no end. I’m opening the book on this one today. What do you say, Terrell? I’ll give you five to one Ms. Kent won’t give Idaho the time of day.”
“Stuck-up bitch won’t give nobody the time of day,” Biedermeier mumbled.

At the other end of the bar, Docia tried for a better look at the most gorgeous man in Texas without attracting too much attention. She leaned forward slightly, tipping back her head, and checked the mirror again.
Lordy, he was big! At least six-three, probably more, given the way he towered over the people around him. Brown hair just long enough to curl over his collar. Short beard and moustache. Shoulders that looked too big for his denim shirt. She’d bet anything he had on boots too.
Boots. Over a year since she’d had boots underneath her bed.
Docia took a deep breath, balling her hands into fists. Get a grip. Getting horny over a perfect stranger was pathetic. Besides, they never turned out to be as good as they looked, did they? Particularly not if they were interested in her. Probably just some jerk from Dallas with a cowboy complex.
“Janie,” she murmured, “who’s the guy at the end of the bar?”
Beside her, Janie’s body shifted. “No, don’t look!” Docia hissed. “Use the mirror.”
Aw, hell, now she’d been magically transported to high school.
Janie peered beyond her into the mirror. “You mean Doc Kleinschmidt?”
“No—” Docia nodded toward Gorgeous, “—the one next to him. Kris Kristofferson, circa 1976.”
Janie grinned. “You mean when he was in A Star is Born? Personally, I like the way he looked in Songwriter better. You know, when he had that little white streak in his beard…”
Docia gritted her teeth. “Janie, just tell me who the guy is, okay?”
Janie leaned forward again. In the mirror, Docia could see Gorgeous talking to Kleinschmidt. For a moment she could swear he looked her way. Quickly, she picked up her margarita, dropping her gaze. “Well?”
“Holy crap, he’s a big one, isn’t he?” Janie straightened again and sipped her wine. “I’ve never seen him before.”
“So he’s a tourist?” A jerk from Dallas just as she’d thought. Another Mr. Wrong. Not worth the trouble. Docia fought down a faint tang of disappointment. Better this way.
“No, I think I know who he is.” Janie’s brow furrowed in thought. “He’s probably Doc Rankin’s new partner. The new vet.”
A vet. Well, hauling large animals around would certainly explain the body.
“You’re interested, aren’t you?” Janie peeked back down the bar. “Wanna go down there and introduce ourselves?”
“In front of Kleinschmidt?” Docia shook her head. “Don’t think so.”
“What’s wrong with Wonder Dentist?”
Docia grimaced. “He reminds me of my macroeconomics professor. The one who wrote ‘pathetic’ across the top of my term paper.”
Just another Konigsburger who found her not quite up to the town’s standards.
She chanced another glance at the end of the bar. Even if he was a local, Dr. Gorgeous could still be a jerk.
Would she know what to do with him if he wasn’t? Did she even remember? And, of course, there was no guarantee he’d be interested in her.
“So what do you want to do?” Janie’s brow furrowed. “I could try luring Wonder away, but then I’d feel funny the next time I needed my teeth cleaned.”
“Don’t do anything.” Docia massaged her neck again. “I’m not interested in introducing myself to a complete stranger.”
Why today? Why couldn’t she have been wearing that gauze shirt she bought yesterday at the Lucky Lady? Why couldn’t she have washed her hair last night instead of waiting until tonight? Why couldn’t they have sat at a table instead of bellying up to the end of the bar like a pair of biker chicks?
She was dirty. She’d been moving boxes all afternoon. She smelled. This was not the day to meet Mr. Right. Assuming Mr. Right existed anywhere except an alternate universe, which, given her luck, wasn’t likely.
Hell, damn, stink! 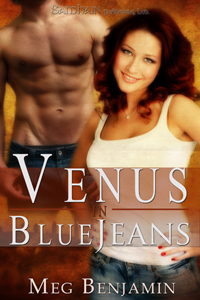 More Books by Meg Benjamin
« Be My Baby
Love On Tap »